Find out what's coming up for Family, Food & Fun Events in Knoxville and Surrounding Areas!

FESTIVAL ON THE 4TH

The Festival on the 4th delivers a wide variety of family fun including entertainment, activities and treats at the City of Knoxville’s 4th of July celebration at the World’s Fair Park.Throughout the day festival goers will be treated to good music, good food, good fun and good times on the Festival and Performance lawns of the World’s Fair Park. From 4 p.m. to 8 p.m., The Festival Lawn will be filled with fun activities to please kids of all ages such as miniature golf with Holes to Go and Lego building with Bricks for Kids. Join us at 4 p.m. for some live music on the Festival Lawn. Returning to Festival on the 4th this year is the Home Federal Family Fun Stage will feature live entertainment with new and exciting interactive fun for the whole family taking place inside the Amphitheater from 4 p.m.- 7:45 p.m.

Get the best of both worlds this Labor Day weekend during Dollywood’s Rock the Smokies event. This daylong celebration pairs the thrill of Dollywood rides and a powerful Christian Rock experience at the Dollywood Celebrity Theatre.

Knoxville Brewfest is held around the fountains and lake at the base of the Sunsphere and Tennessee Amphitheater. With more space, seating and natural shade, you’ll enjoy strolling along the water while sampling over 300 beers from Tennessee and beyond!

Join us for the 10th Annual SUMMER SWING hosted at the Knoxville Botanical garden! It’s going to be the biggest and the best, so definitely bring a guest! Are you ready for an amazing night? This fabulous annual fete will feature a Live Band, Cocktails, Southern Savannah Style Fare, Great Company, Live Auction and a few surprises! 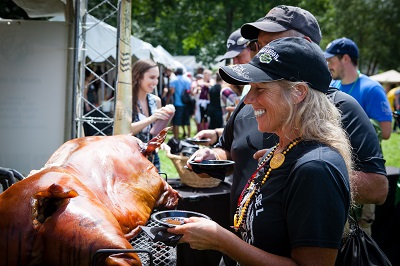 KNOXVILLE ZOO’S FEAST WITH THE BEASTS

Presented by ORNL Federal Credit Union, the event will offer samplings from Knoxville’s top restaurants, wineries, breweries, and distilleries! The 25th Annual Feast with the Beasts is for guests ages 21 and older and guests must show a valid photo I.D. to enter the event. All proceeds directly benefit Zoo Knoxville.

The Eagles founding member, the late Glenn Frey, knew what he was saying when he dubbed Little River Band “the best singing band in the world.” Through the ‘70’s and ‘80’s, LRB enjoyed huge chart success with multi-platinum albums and chart topping hits like: “Reminiscing,” “Cool Change,” “Lonesome Loser,” “The Night Owls,” “Take It Easy On Me,” “Help Is on Its Way,” “Happy Anniversary,” “We Two,” “Man On Your Mind,” “The Other Guy,” and “It’s A Long Way There.”

Enjoy this classic 1984 movie about three former parapsychology professors who set up shop as a unique ghost removal service.

After working in the industry for more than 40 years and selling over 26 million albums, Gill is one the most successful musicians and guitarists of his time. Gill recently released the record Down To My Last Bad Habit, of which he wrote/co-wrote, co-produced and is a featured musician on all 12 songs. In addition to his solo shows, in 2017, Gill was invited to join the Eagles for a number of festival shows and will continue to join them onstage throughout 2018. Gill achieved his big breakthrough with “When I Call Your Name,” which won the Country Music Association’s Single of the Year award. Since then, he has won 17 more CMA honors, including Song of the Year four times – making him the most-awarded artist in that category in CMA history.

Getting to Know Payton Smith